Went to a wedding

This last weekend we loaded up the cage, bike on the back, and drove to New York.  My lovely wife’s lovely cousin was to be married at a lodge in the middle of nowhere, surrounded by State Forest.  Dirt roads, horsey trails, fall foliage!  How could I not bring the bike.  As it turned out, we were put up in another lodge roughly 18 miles away via unlined country roads.  I decided to ride to the wedding, and employed Google Maps to find a suitable route.

About 18 miles.  Hour and 45 minutes.  With some stopping to take pictures, 2, 2 and half hours.  No problem.  I left our lodge three and a half hours before the wedding was scheduled to start.

I anticipated getting there before the wife and children, so I packed my saddle bag with a pair of shorts and t-shirt so that I wouldn’t be wandering around, pre-nuptials, in my Spandex, showing off my gear.  Christie would bring my wedding attire in the car. The saddle bag also contained the standard crap I drag along on every ride; tube, patch kit, multi-tool, rain shell, wallet, and phone.  Since it was cold when I left, and the weather guy said it was supposed to warm up, I put a fleece over my jersey, donned the full-fingered gloves, and tossed my fingerless gloves in the bag.  As usual, the frame pump rode along, sandwiched between the head and seat tubes.  (That part is important.)

There was dirt. Lots of dirt. This particular dirt, leading away from Beaver Point, was packed hard and rolled fast. Whee! 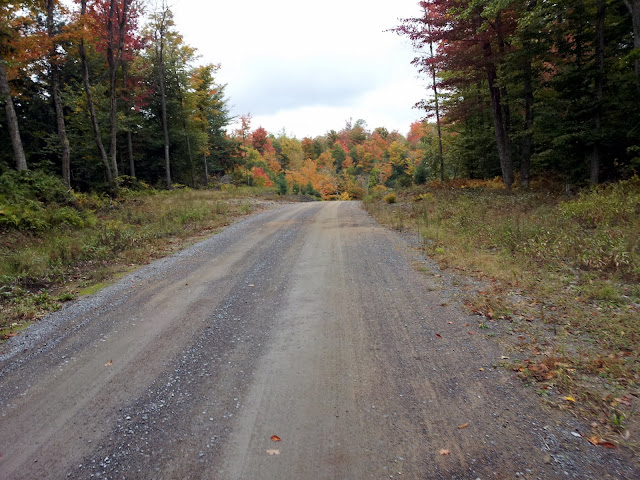 It didn’t last long, at first, and eventually dumped me out onto a paved surface. The scenery was heavenly. Like this. 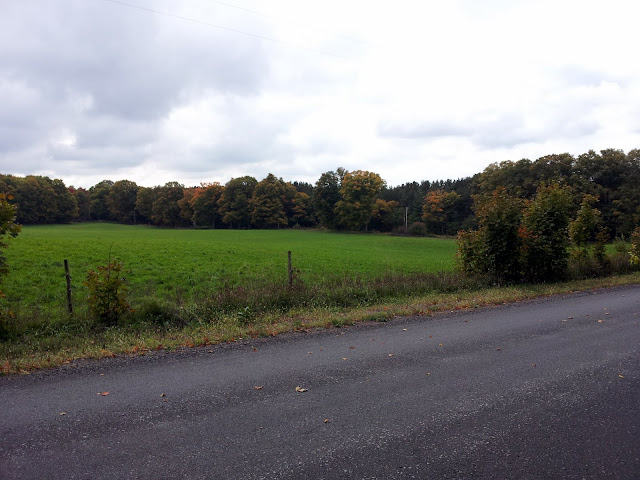 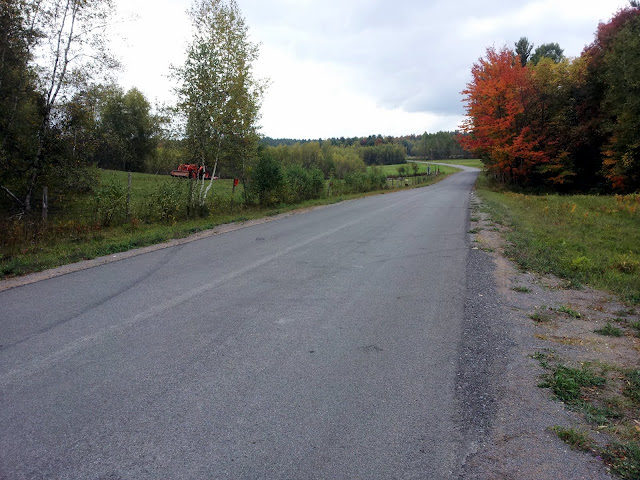 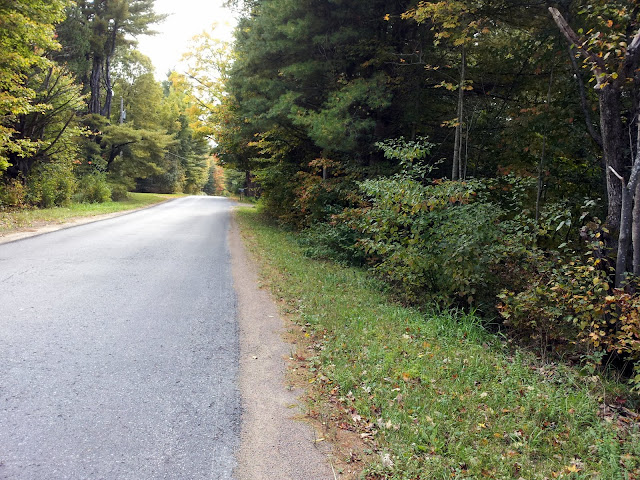 What I didn’t know was that a horsey lives here. He was happy to see me and put on quite the show, prancing around and snorting. I think he wanted an apple. Or maybe a cigarette. You never know with horsies. 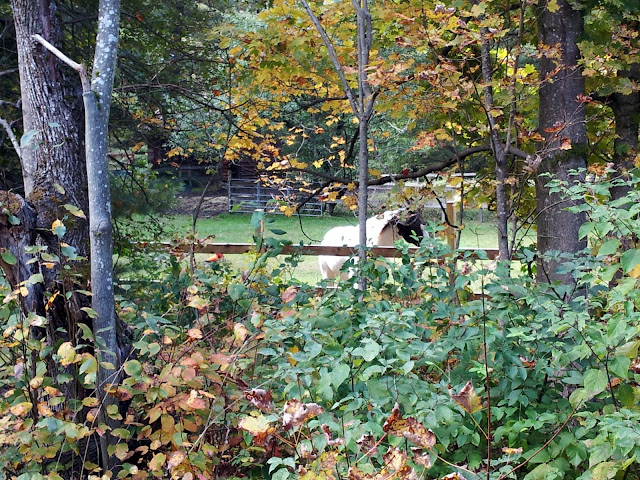 I passed many dirt roads and little trails, heading off in the wrong direction. A week wouldn’t be enough time if all did was ride. I wonder where this one goes. 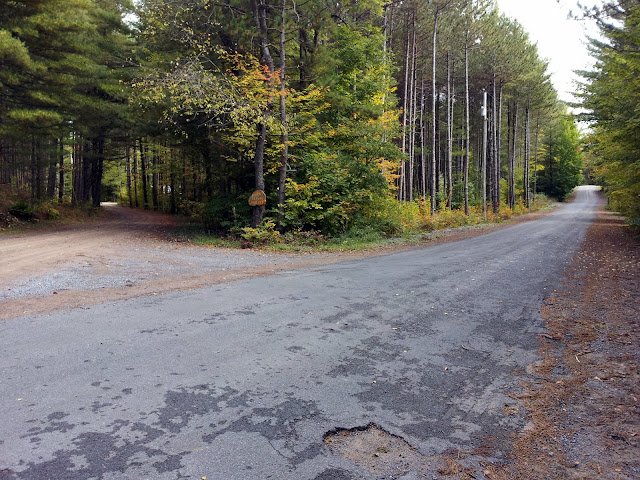 I eventually got to McPhilmy Road, ahead of schedule. McPhilmy is dirt, or sand rather, from one end to the other. Most of it was ridable, but much of it was very soft. My 28mm road tires were no match this stuff and I walked a lot. 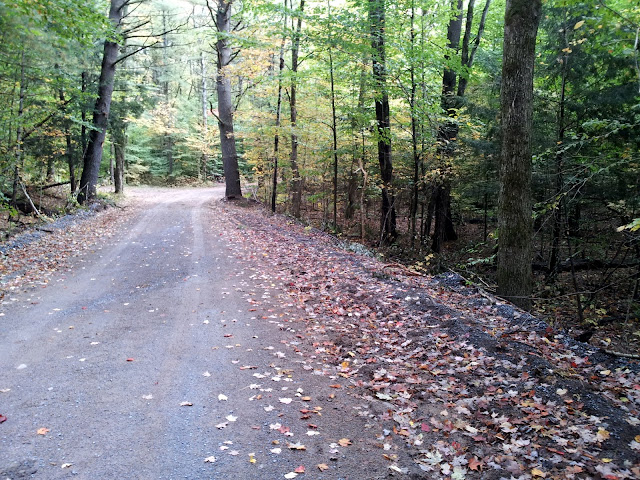 I made a small error at the intersection of McPhilmy and Bailey. This intersection was not signed, and I mistakenly thought I was at Stony Lake Road, where I was to turn left. Besides, there was a sign across the road that said “Dead End”. So turn left I did, onto the sandiest of the sandy roads, and walked nearly half a mile before realizing I was headed the wrong direction.

I backtracked to McPhilmy and resumed a correct course, rolling past the “Dead End” sign. Those of you who cycle know that dead ends are often only dead ends for those sad souls stuck in a car. The bridge has holes in it, or the road’s washed out, or maybe the county is broke and just can’t maintain it any more. So they close it and put up a sign. But a bicycle can often sneak through. 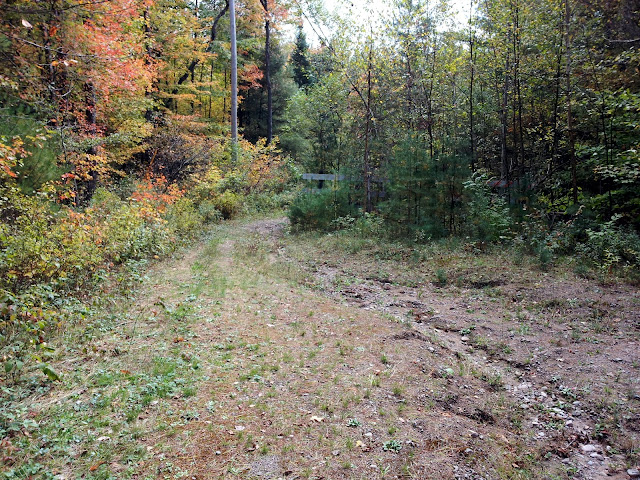 A more accurate sign would have read “Bridge Out. For the last 30 years.” It would have also notified the fine folks at Google Maps and told them not to plunge unsuspecting travelers into the icy depths. Anyway, this is where the bridge used to be. 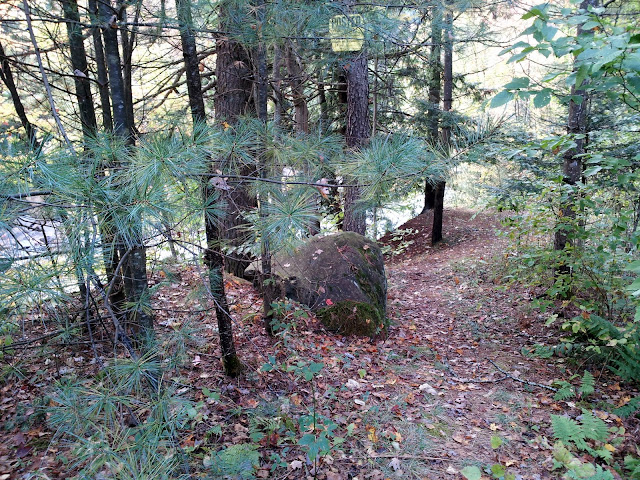 And this is what it crossed once upon a time. 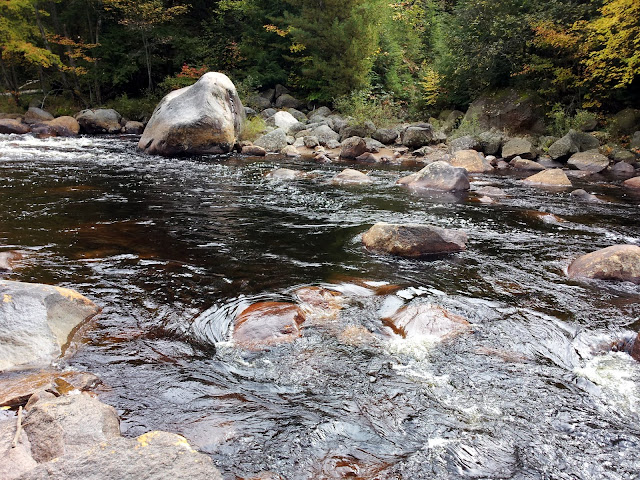 I considered turning back, but I was already pushing my time limit, what with the detour down Sandy McSand Lane. The only rational choice was to shit-can any semblance of intelligence and cross the stream on foot. I stuffed my phone into the saddle bag, removed the frame pump, and hoisted the Pacer onto my right shoulder, a la cyclocross. Then I waded out into water that couldn’t have been warmer than about 50F. The river bed was rocky, the rocks were slippery, and the water was fast. Take another look at the photo above and note the location of the large boulder on the other side.

Trying to find a safe way across was difficult. My path was zigzag-ish and I nearly fell several times. But the frame pump saved me. It was the third leg of a tripod, and kept me upright when I surely would have went swimming had it not been with me. Those poseurs over at Velominati could learn something from this. (OK, OK. You’re right. They would have turned tail and ran away. And I suppose I could have found a stick.)

I climbed out the other side, one sleeve of my fleece soaked nearly to the shoulder, both gloves wet, and everything below the waist dripping. You can see that boulder in this photo, too. 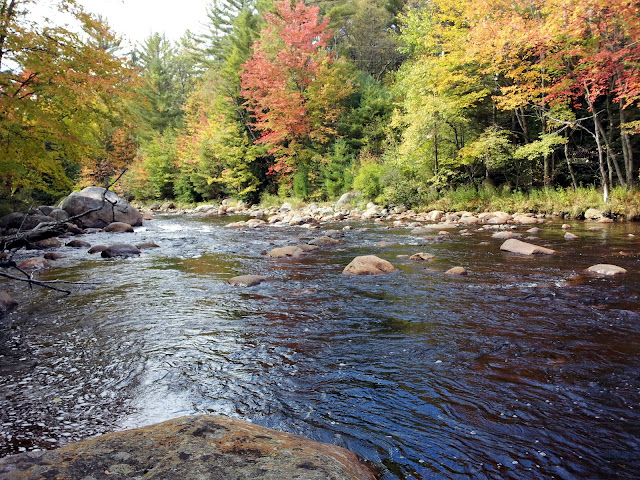 The bike and I scrambled, stumbled, crawled up the bank. This is the view from the other side of the creek. Where the bridge used to be. Google. As in, not there any more. 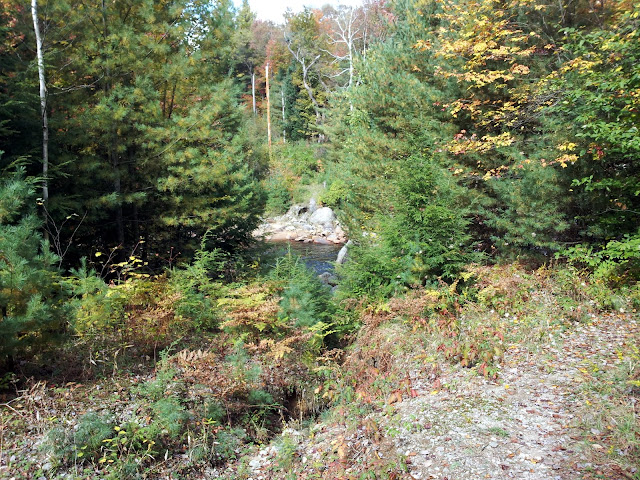 After swapping my wet fleece and winter gloves for a rain shell and fingerless gloves, I turned and rode away from my vanquished foe. 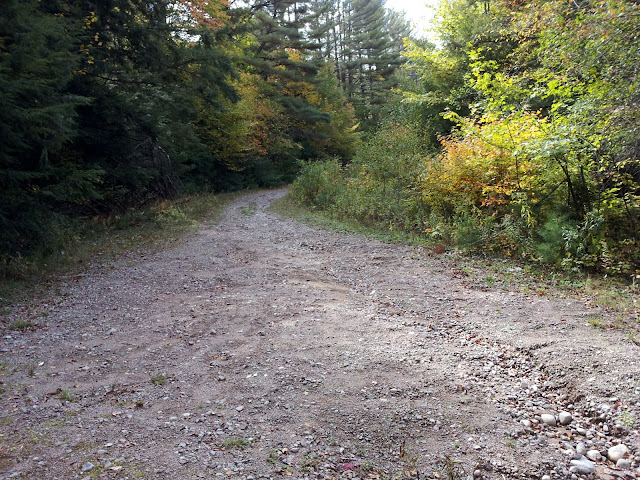 At least until the sand made me walk.

The last few miles were mostly uneventful and mostly snowmobile trails. These “roads” are crisscrossed with tree roots and paved with pine needles. It was slow-going, but fun and scenic. 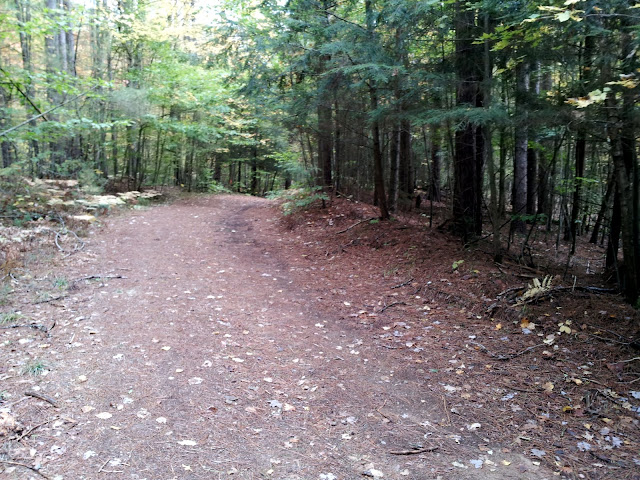 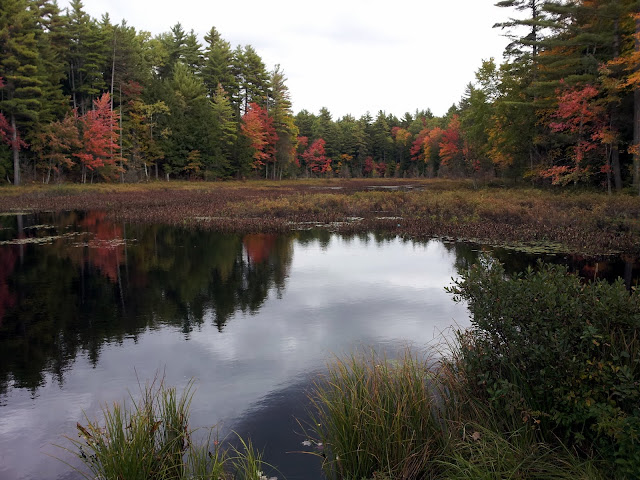 Right about here, Google Maps routed me onto a road that doesn’t exist. Adirondack Park Preserve most definitely exists on the other end. Maybe it goes somewhere else. Maybe it dead ends long before it gets to East Shore Rd., but there’s not even the remnants of a long forgotten logging track. Nothing but trees and ferns. I made a couple quick course corrections and continued on. 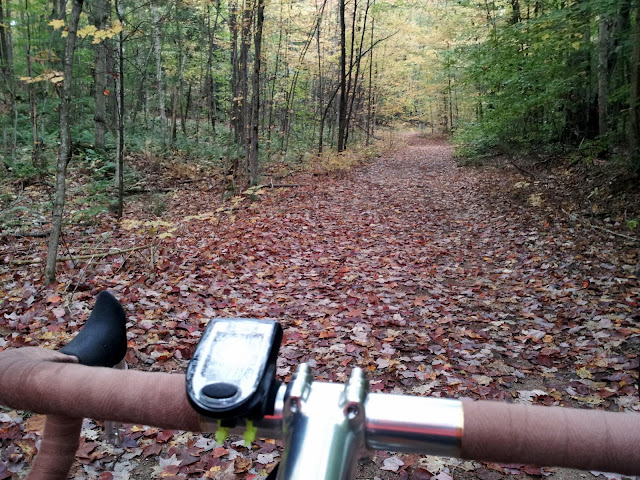 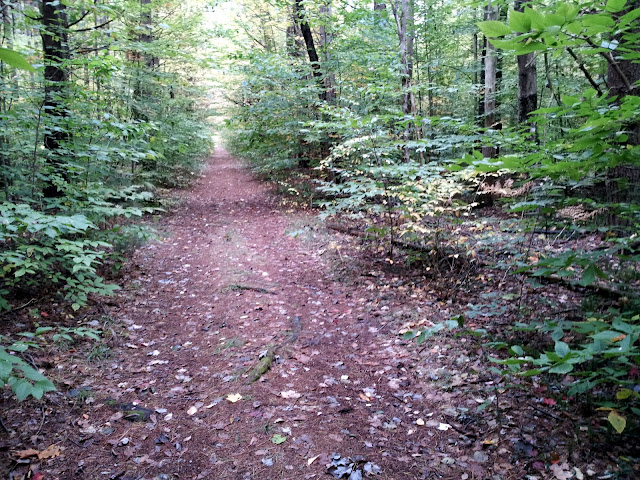 Finally! I had reached the driveway to the Otter Creek Lodge, and my last half mile or so was once again hard packed, fast dirt. 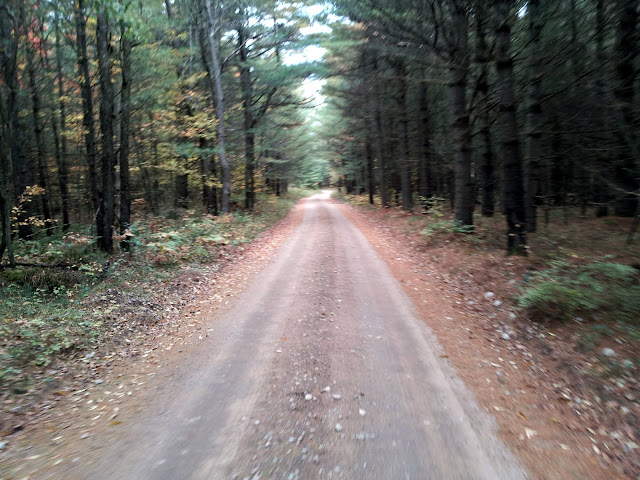 I had arrived with 20 minutes to spare, an extra 3 miles on the clock, and I parked the bike on the porch and dashed inside. My wife had laid out my clothing in a spare room and I even stopped sweating before the ceremony. First time for everything, I suppose.

At the end of the journey. 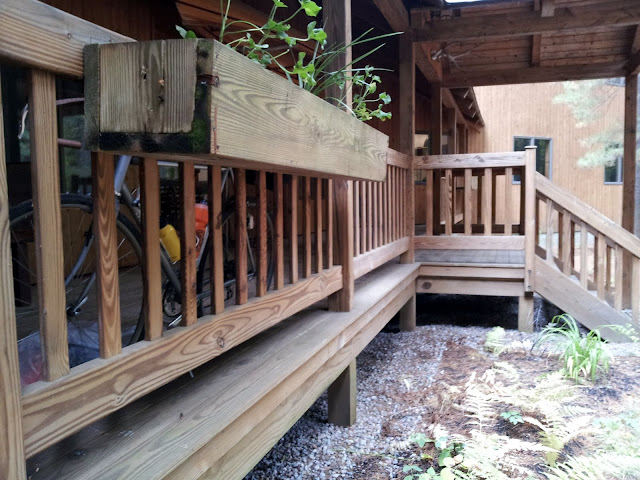 In all, this was a lovely ride, and I wouldn’t change a thing. Not even the stream crossing. The roads and trails in this part of New York are fabulous and it is conceivable to me that a person could spend the better part of a life-time riding them and never tire of it. I can’t wait to go back.

9 Responses to Went to a wedding