July 28, 2012.  I swung a leg over the Silver Bullet and shoved off toward Mercersburg.  This was, I hoped, not to be a repeat of my first attempt several years ago, which ended 25 miles early at a McDonald’s, soaking up their AC and trying not to puke while I waited for the cavalry to bail my fat ass out. It had been my longest day in the saddle ever.  Nearly 50 miles.  Part of my new motivation was simply the fact that there would be no bail out, no matter how far I fell, which meant I’d have to find a shady tree and take a nap under it.  The horror.

Back then I was 25 pounds heavier with a pack-a-day habit.  July the 28th bore forth a man lighter than he’d been in a decade, an ex-smoker, with over 400 miles behind him during the last few weeks.  A veritable god among men.  OK, maybe a demi-god.

Hero of the Republic?

My weapon of choice would be a Surly Pacer.  The Silver Bullet.  A steed I had almost forsaken, thinking she was too big, too stretched out.  I had ridden her most of July and grown quite fond of the fit and feel.  Several years of trial and error and Christie’s money had shown me what was best in a bike, and I had kitted her out appropriately.  Cloth bar tape and a firm leather saddle.  Down tube shifters mated to a nearly new Shimano 600 rear derailer.  A Carradice Bagman supported a canvas saddle bag, which in turn held my abundance of crap – rain shell (didn’t need it), Lara bars (didn’t eat them all), tools (never touched them), wallet (empty), phone (dead) and GPS (the only useful bit in the whole bunch).

I rolled out at 6am.  By the time I arrived in Carlisle, I had to pee.  Like, now.  The first convenience store displayed a sign in the window – “No public restroom.”  I feigned ignorance.  The middle-eastern girl behind the till showed indifference.  I grabbed the nearest candy bar, dropped it on the counter and offered up the cash.  She pointed to the “employees only” door at the back corner. 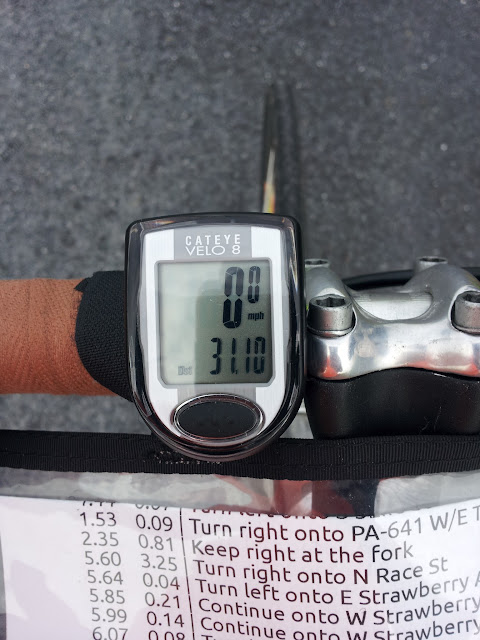 I was skeptical of actually meeting this goal.  So was everyone else, I think, though they were mostly supportive.  25 miles a day, most days, at oh dark thirty with Bill and Owen.  And it’s up there in a photo on the Internet.

Newville is a pretty little town that sits at the crossroads of 641 and 233.  Both are busy roads (and I’d be riding them again in the near future).  I approached Newville on a farm road and only had to deal with 641 for a couple blocks before making the left onto 233, and then a couple blocks more until peeling off to the right in search of the Cumberland Valley Rail Trail and 11 miles of flat and easy all the way to Shippensburg.  I missed my turn and went a few gorgeous miles out of the way along Big Spring Road before correcting my course. 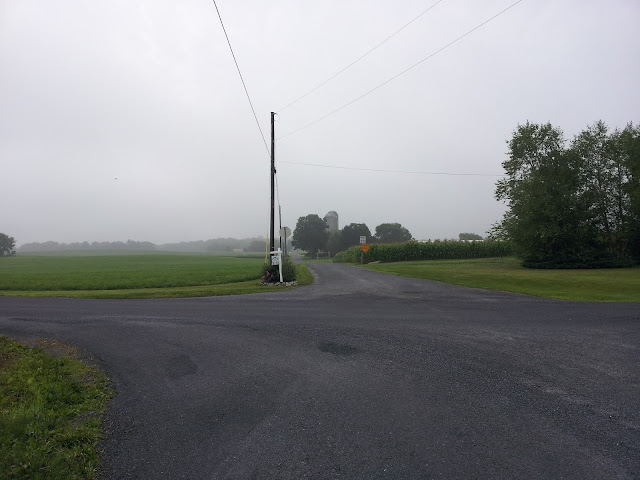 So maybe 8 miles on the rail trail.  Their sign-age is funny.  In addition to a stop sign at every cross road there are a myriad of unenforceable requirements.  No weapons.  No riding after dark.  Walk your bike across the intersection.  And cyclists please, oh god, pleaseohplease wear a helmet.  I think the signs are there to make the trail commission feel better about being safety conscious or some such.  Granted, it is technically private property, owned by a non-profit.  So I suppose they could have come out there and told me I was trespassing and made me leave or whatever.  Feel-good-ism and CYA above all else, I guess.

The trail doesn’t extend into Shippensburg as suggested by Google Maps.  That’s a future expansion.  It currently ends at a park just north of the University.  This turned out to be a nice place to stop. 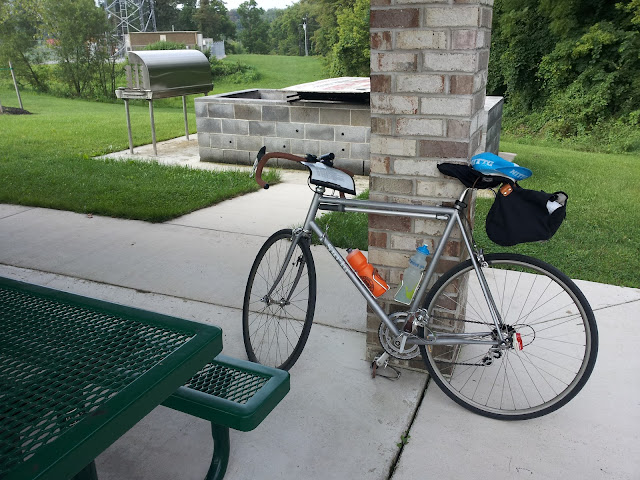 The Pacer taking a much needed break. BTW, I made it to Shippensburg without bonking!

I realized at this point that I hadn’t taken my chain off the big ring since leaving home. And thus was hatched the most retarded scheme in history – I would ride all the way to Mercersburg without touching the front shifter.

As I approached Letterkenny and then Chambersburg, I knew I was truly in southern Pennsylvania.  The proof was at a yard sale, though I didn’t have the opportunity to take a photograph of the woman as she climbed down from the lifted 4×4, wearing heels, jogging shorts, beer gut and tube top.  Her shirtless companion, in flip-flops and cut off BDUs was easier to purge from the memory banks.  I’m fairly certain her image is permanently etched upon my retinas.

The sun was in full fry mode by this point and the weatherman’s “partly cloudy” really meant “clouds everywhere except between the Sloth and the sun.”  Traffic was heavy south of Chambersburg, too, and I started to look for a place to find some shade for a few minutes.  A Pepsi machine appeared on the left, as if summoned by Mordenkainen himself, and beckoned me to partake of the fizzy.  It turned out the diet button was really a Pepsi Max, but getting a refund proved difficult.  I drank it anyway and sat in the shade for a few minutes. 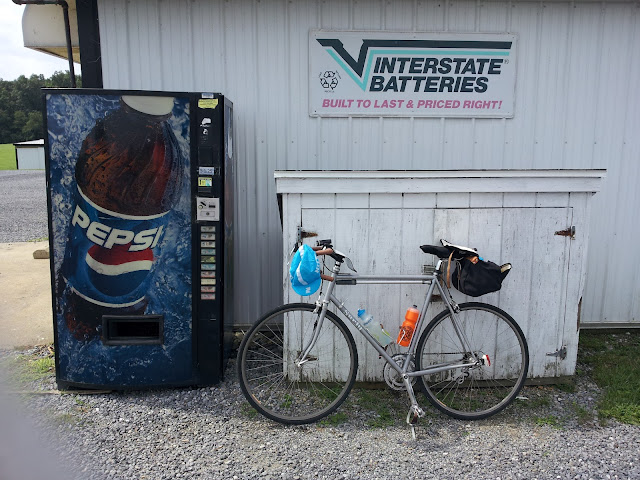 When it was time to go I looked down at the computer and noticed something funny. 62.69 miles. You know what that means, don’t you? 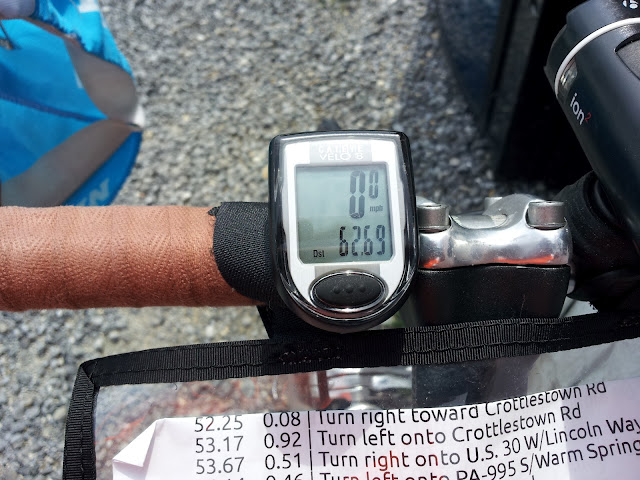 Hot damn! I was stoked.  I had just ridden 100km and felt pretty good.  Hell, I decided, I’m going to start training for my first 200k brevet.  This was easy.

Back on the bike and rolling, I burped up every last molecule of carbon dioxide, along with whatever reserves I had left. There were only 10 miles to go, and I was about to hate every last one of them. The man with the hammer had been hiding in that Pepsi bottle the whole time. Even the slightest incline, grades I wouldn’t notice at any other time, required all my strength. But I still wouldn’t shift the chain off the big ring. The chain, over most of that last 10 miles, was in 53/28. But I made it. 72.9 miles.

This entry was posted in Bicycle, Fat ass, GPS. Bookmark the permalink.