A few things have happened since the last installment.  We bought a house, moved our stuff, cleaned the old place, and tried really hard to not pull all our hair out.

Bicycle miles for March are pretty close to zero.  As such, I kinda didn’t finish the Utilitaire 12.  I suppose I could have, and probably did, get in enough riding to do 12 utilitaires.  But they were mostly out of necessity and time didn’t allow for much variety.  I did, however, get a big ol’ Honorable Mention from the ever-so-lovely MG.  And that was super cool.  Thanks, MG!

I’ve had to do some plumbing.  The new (old) kitchen required a new faucet and dishwasher.  The new (new) bathroom needed a new shower head.  I have yet to figure out why in hell anyone would voluntarily choose to become a plumber.  Furthermore, I don’t understand how anyone with less than 7 joints in each limb can make a living out of it and not have to hand over their entire pay check to a chiropractor.  Eugene Tooms could have been a good plumber.

The rSogn is getting closer to done.  I’ve attached a Nitto M12 rack and an Ostrich handlebar bag.  Speeding down hill with a front load and no hands is wicked cool. 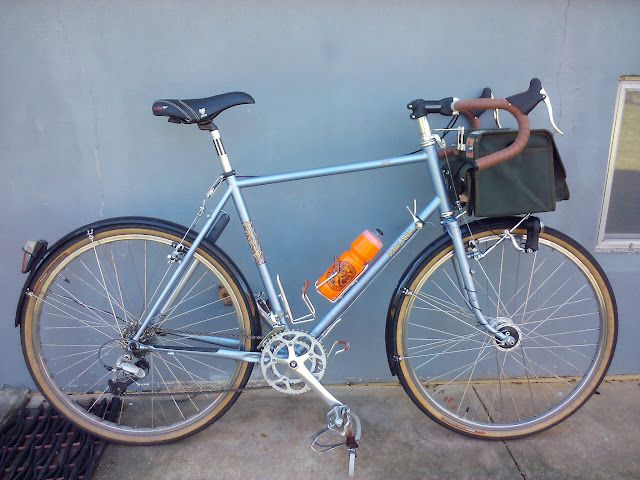 I just received a snazzy new set of stainless fenders from Velo-Orange. Anyone want to see a pictorial installation how-to? I’ll try to get that done within the next few days.

A slow, easy S24O is coming up.  Tentative plans have us heading down to the Lower Allen Township park and camping along the Yellow Breeches.  If you’re near Harrisburg, PA for the second or third weekends in April and would like to come along, lemme know.

I think that should just about wrap things up.  Tune in next time for co-ed naked alligator wrestling in a mud pit.

This entry was posted in 650b, Bicycle, Cycling Blogs, Email the Sloth, Harrisburg, rSogn, S24O. Bookmark the permalink.

One Response to Spring cleaning