A Spanninga dynamo and lights showed up at my door yesterday.  So I put them on the all-rounder.  The dynamo is like this one from VO.  The lights look like these.  This is what I think thus far.

Installation was fairly straightforward.  I used the canti-post bracket, which requires the bolt to be removed from the left front cantilever post, the bracket positioned in place, and a new, slightly longer bolt to hold the whole thing together.  Easy peasy.  Next up is the dynamo.  One nut and bolt to hold it on the bracket.  In my case, simply raising it all the way up in the slot and squaring the knurled wheel with the tire was all it took. 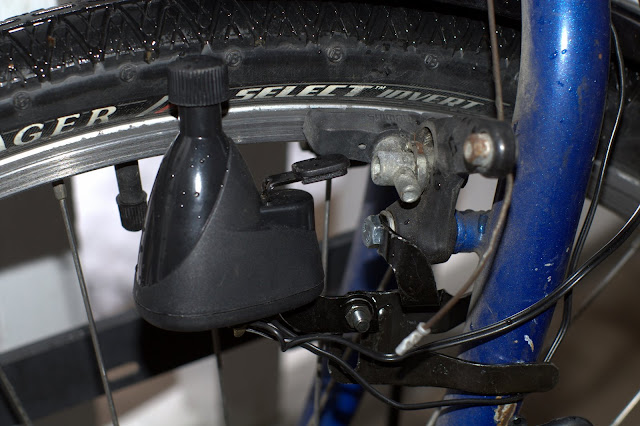 The headlight is a low-end Lumotec knock-off.  It’s functional and plenty bright, but its lightweight plastic body doesn’t exactly scream “durable”.  The fork crown mount is a B&M style, but too narrow to fit the light.  It took a little persuasion with pliers to get the fit just right.  As you can see in the following photo the light is resting on the front fender.  The light itself is mounted as high as that bracket would allow, while the fenders are mounted as low as possible.  Wiring the light was a pain.  The little connectors didn’t quite fit and I ended up connecting the wires directly and then twisting them into place. 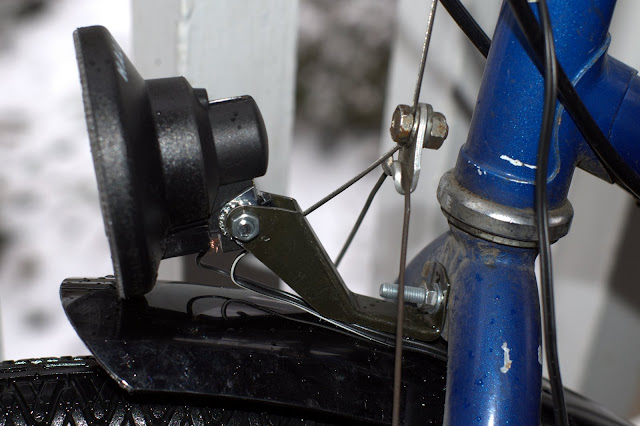 The taillight was super easy.  I had to remove the mud flap from the SKS fender and drill one extra hole.  The light has plenty of room for the wires, which feed through one of the fender holes. 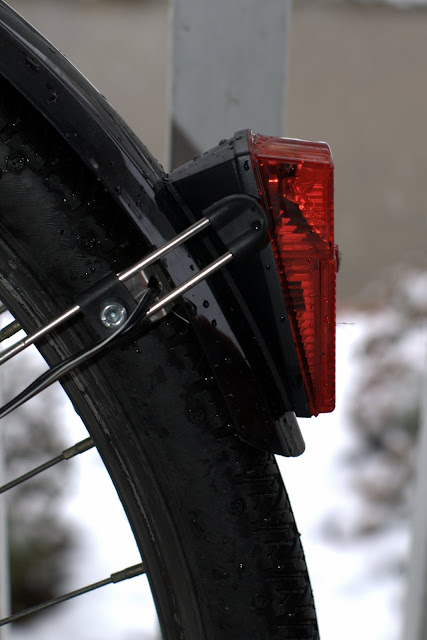 Wiring was wrapped around the frame tubes and left loose.  Since I’m not quite sure everything is just where I want it, I was hesitant to strap it all down.  Note – I shouldn’t look directly at the headlight while spinning the front wheel.

Test ride.  The tires are 1.5″ Bontrager Inverts on 26″ rims, and the dynamo only sits about 1/8″ away from the sidewall when not engaged.  This is good because when it is engaged, it really hugs the sidewall tight.  A light touch on the switch flipped the dynamo into the tire and off we went.  It was raining last night and the dynamo never slipped once over 2.5 miles or so.

Compared to my Cateye headlights this one is much brighter with a wider beam.  It’s at least as bright as the Cygolight.  It needs to be aimed lower.  As it’s already sitting on the fender I’ll have to get a different bracket to do that.  Neither the lights nor dynamo have standlight circuits, which means the lights go out as soon as the dynamo stops spinning.  On the plus side, the headlight is surrounded by a white reflector and two-thirds of the taillight surface is a red reflector.

The dynamo is a bit noisy, falling somewhere between an RC car and a battery powered pallet jack.  The last time I owned a bottle dynamo was about 25 years ago.  It made the bike hard to pedal and didn’t really work very well.  This one created a noticable load, but not so much that I had to downshift.

My conclusion?  This is definitely an entry level lighting kit.  The dynamo seems sturdy, the lights are flimsy and the hardware is hit-or-miss.  But it works well, even in the rain.  I imagine the lights will fail first.  It’s easy enough to replace them with something better from Lumotec.  Considering the price, this kit is one hell of a good deal.  4 out of 5 dustcaps.

And now the disclaimer.  I purchased mine used.  It did not arrive in the original packaging and I do not know if the hardware I received is the hardware that you’ll recieve should you order your own from VO.  It did match the instructions, though.

Last night’s 6 mile ride was not the confirmation I had hoped for.  The light kit worked wonderfully and provided plenty of light.  However, the constant whirr from the dynamo was just too much.  This kit is going on the beer bike/grocery getter.  As far as I’m concerned, based solely on the noise, it is not suitable for extended use.